From the trader's desk..

The last trading session of the week followed similar path like every other trading sessions this week, as losses in MTNN (-84bps) and DANGCEM (-21bps) among others closed the index down by 22bps to settle at 26,855.52. Total value traded for the day however increased by 24.14% from ₦2.85bn previously traded to ₦3.53bn due to large trade in DANGCEM (which accounted for c.50% of total market turnover). Similarly, the week to date performance came in negative at -0.54% as the ASI dipped in all trading sessions for the week. The Consumer goods sector emerged as the lone gainer for the week, rising 1.71% due to positive movements in UNILEVER and UACN, while the INDUSTRIAL sector (-1.27%) emerged as the worst performing sector as a result of losses in WAPCO and DANGCEM.

For a breakdown of stock performances, please see the pricelist.

What will shape the market tomorrow?
Having failed to record any positive return in the week while most bellwether stocks lost some portions of their market value, we expect trading sessions at the domestic market next week to be filled with bargain hunting as investors seek to position in fundamentally sound stocks that declined this week.

Stocks to Watch
On the Bid Cart: UACN once again closed the day as one of the top gainers, rising 683bps to close at its highest price in nine month (₦8.60). Initial selloffs at the beginning of the week however limited the impact of the consecutive upward movement recorded at the last two trading sessions of the week, leading to a 7.50% gain WoW while having its YTD performance pegged at -11.79%.

On the Offer Cart: Trading session today was dominated by sell offs as large cap stocks such as  UBA (-290bps), MTNN (-84bps), GUARANTY (-66bps), ZENITHBANK (-53bps) and DANGCEM (-21bps) closed the last trading session of the week at the negative side. 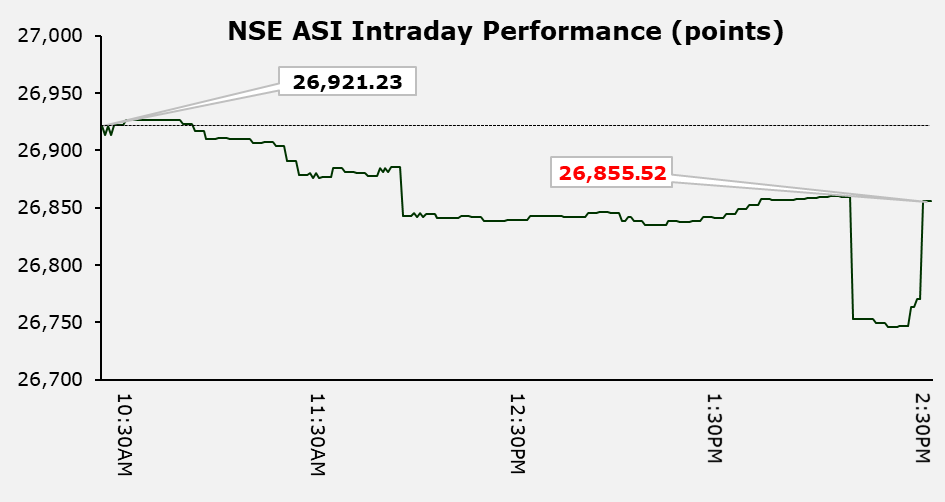